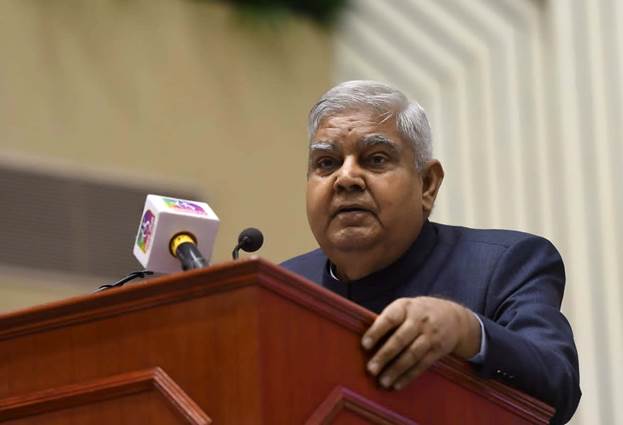 Our craftsmen are India’s ambassador of heritage to the world, said Shri Jagdeep Dhankhar, Hon’ble Vice President of India, while addressing the Shilp Guru and National Awards organized by the Ministry of Textiles here today.

Shri Dhankhar said that India is on the rise as never before. “We are the most favoured destination globally for investment and opportunity. And the craftspersons associated with handicrafts and handloom sector have played their role in this growth,” he said.  Talking about the craftsmanship and skills of the artisans, the Hon’ble VP said that such refined skills make India proud.

“The craftspersons are the beacon of our culture. I am privileged to indicate you are the most forceful and impactful embers of our culture & creativity. You indicate to the world, the enormous skills that India possesses,” he said.

The Shilp Guru and National Awards to master craftspersons were distributed for the years 2017, 2018, and 2019. Due to the pandemic, the event couldn’t be organized physically. 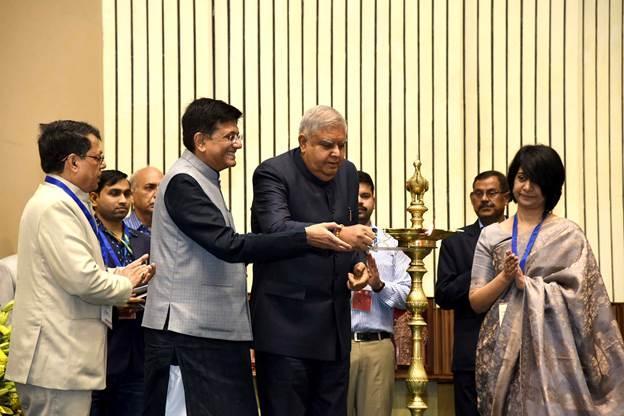 Mentioning the pandemic period when India outshined the world by providing 3 billion vaccines to our people and this was supported by digital mapping of the vaccination programme, he said that no country in the world can even think of such an initiative. He also mentioned that a ration to over 80 crore beneficiaries is also being provided since the first lockdown.

Shri Dhankhar added that the presidency of G20 indicates that the world is listening to the Hon’ble Prime Minister and his vision. He said that he is confident that by end of the decade India will become the third-largest world economy.

Union Minister of Textiles, Consumer Affairs, Food and Public Distribution and Commerce & Industry, Shri Piyush Goyal said while delivering the address said that handicraft handloom is a cornerstone for a self-reliant, confident India that is engaging with the rest of the world.

He said that our shilpkar’s have, down the centuries, developed their own – often unique – methods and techniques to bring life into stone, metal, sandalwood, and clay. They had, a very long time ago, perfected scientific and engineering processes far ahead of their times. Their creations revealed their sophisticated knowledge and highly developed aesthetic sense. Production of handicraft items provides livelihood opportunities to lakhs of people living in rural areas at a low capital investment and has a good domestic and international market, which forms parts of the Indian heritage, culture, and tradition.

He said that the production of handicraft items holds special significance in the economic empowerment of women living in rural areas, as production can be made within the house along with other household chores. Women are a large part of the workforce and constitute over 50% of the artisans’ sector.

Adding on he said that importance of crafts in the socio-economic livelihood of the vast segment of the rural population cannot be overemphasized. While the award is given in recognition of excellent craftsmanship and the major role played by them in continuing craft as a vital part of traditional heritage, it is also necessary to recognize product excellence keeping in view the global market trends.

Shri Goyal said that promotion of handicrafts not only ensures a balance between the traditional values and contemporary outlook of a nation but also bestows shelter for skilful hands of the country. He also quoted Hon’ble PM who said, “Handlooms & Handicrafts manifest India’s diversity & the dexterity of countless weavers & artisans”.  The Union Minister said that India’s export of handicraft/handloom is increasing. Also, our products are more sustainable than others.

He said that under the leadership of PM, India has strived that in 2047 during 100 years of Independence, the country will be developed country and prosperous country.

30 Shilp Guru Awards and 78 National Awards for the years 2017, 2018, and 2019 were presented to master craftspersons, 36 of whom are women. The main objective of the awards is to give recognition for their excellence in craftsmanship and valuable contribution to the Indian Handicrafts and textiles sector.

The Shilp Guru Awards are given to legendary master craftspersons in recognition of excellent craftsmanship, product excellence and the role played by them as gurus in the continuance of crafts to other trainee artisans as a vital part of traditional heritage. The Awards were started in 2002, to celebrate the Golden Jubilee of the resurgence of Handicrafts in India. The Award consists of a gold coin, Rs.2.00 lakhs prize money, a Tamrapatra, a shawl, and a certificate. 30 Shilp Gurus have been selected for the years 2017, 2018, and 2019 out of whom 24 are male and 06 are female.

The exquisite products of the Shilp Gurus and National Awardees will be on display at National Crafts Museum & Hastkala Academy, Pragati Maidan, Bhairon Marg, for the public from 29th November to 5th December 2022.

The Government implements various schemes for the promotion and development of the handicrafts sector under “National Handicraft Development Program (NHDP)” and the Comprehensive Handicrafts Cluster Development Scheme (CHCDS) through office of the Development Commissioner (Handicrafts).